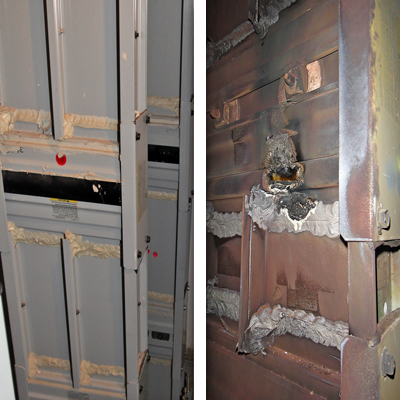 A 41-story, Financial District, Class-A office building experienced multiple electrical busway explosions over a number of years since their installation. Some of these explosions occurred in close proximity to occupied spaces. Numerous parties had investigated these events and had hypothesized a number of different root causes of the explosions. Various remediation efforts were specified and performed, yet the failures continued, causing outages and repair costs in the hundreds of thousands of dollars.

Jones Group was retained to conduct a comprehensive examination and analysis of the entire busway system. Analysis of the system and the limited failure artifacts that had been retained, confirmed that the busway failures had been caused by a fluid contamination of the busway joints, a very specific failure mode that is identified often in the field of forensic engineering. The failure history was not isolated to any one busway or location. Ultimately, it was found that the contamination was systemic over a large portion of the busway system and that a simple remediation was not available.

Jones Group was instrumental in defining the scope of the problem which allowed the client to make informed decisions concerning personnel safety and business continuity issues, as well as the development of an equipment abandonment and selective load re-distribution plan.